“Be different, be you” – An interview with Sabina Kocherhans

Why we all need more financial intelligence.

They are independent, intelligent, successful, and at risk of being driven into financial dependence by decades of inherited dogma – today’s modern women.

Our beliefs keep us small

Each of us follows unconscious instructions for action that are deeply rooted within us. Our inner dogmas here form the foundation of our psychodynamics and are better known in common understanding as so-called “beliefs”:

The dogmas that develop in oneself from such statements are quite simple:

We are never enough, our careers have a limit (until family planning) and our financial independence ends at the altar.

Financial freedom is a choice

During my coaching training I made the experience that you first have to reflect, accept and sometimes break through your own dogmas.

And I learned even more: “Financial freedom is a choice.”

It starts with separate accounts, interest in politics, economics and investment business and ends with the first signature to open your own securities account, start a business or buy your first property.

The particular challenge of my gender is, of course, that we didn’t learn at home or at school why it’s especially important to be financially independent. I am leaving aside the aspects of pensions and the related old-age poverty at this point, because I think (and hope) that we all know these facts.

Building my own financial intelligence

Until about 1 ½ years ago, I used to switch channels when I saw stock market news on TV and used to smile at my partner in his “men’s corner” in the bookstore among start-up magazines and investment magazines.

As I absorbed the latest insights from mindfulness teachings, he prayed down the current chart developments to me, and I increasingly began to develop a curiosity about them, wondering what aspect of this financial world seemed to fascinate him so incredibly. With the emerging “crypto hype” at the time, I decided to give it a chance and read up a bit on the subject.

The topic became particularly interesting for me also because I spoke at a common evening with friends of the planning of a company and the (albeit indirect) statement received that my partner could realize his idea nevertheless, since he can perhaps also generate more in such a way, both should not found however. The reason given was, of course, simple and therefore all the more unacceptable to me: if they both started a business, it would be difficult, because as a woman starting a family, I would have to be there for the children and would not be able to play CEO.

I noticed two things at that time:

A secure job, marriage, children and a home of my own – not with me

A temporary job, eventually getting married, taking out a loan to buy/build a house and later maybe having one or two kids and working part-time – A life that generations before me have led and will lead after me, but which (at least for me) is not the right one.

I like my job and enjoy working with my colleagues and nice customers every day, but standing still is not for me. Both during and outside working hours, I expect constant development from myself, which is why I decided to train as a systemic coach. Founding a company together with my partner will now subsequently be the next logical step.

But that is not enough. Being a hopeless dreamer and optimist, I naturally believe in true love and give myself over to the hope of staying with my partner for the rest of my life.

However, since you never know what life has in store for you, I want to take my (financial) life into my own hands. My instinct here serves as a natural seismograph to filter out the right investment case.

So, after studying common greats in finance, such as André Kostolany, Napoleon Hill, and Robert T. Kiyosaki, I first began to look at the financial and strategic implications of investing.

I learned the difference between an asset (for example, a stock) and a consumer asset (for example, a house bought on credit that you live in yourself), dealt with the Compound interest (Click here for the Compound Interest Calculator), ETFs, funds, individual equity securities and the background information you need to build your own portfolio on stable pillars (keyword: diversification).

Why I always divide my assets into three 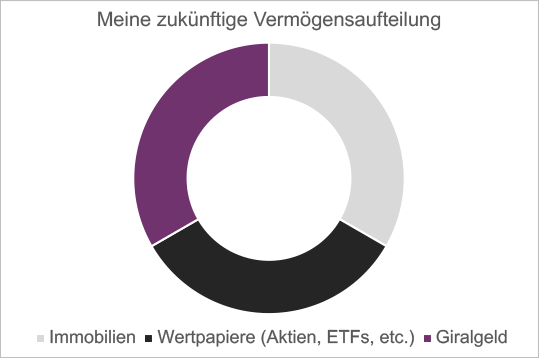 To answer the most important question from the outset: No, I am not the child of wealthy parents. I am middle class, live for rent and share a 19 year old Honda Civic with my boyfriend.

And yet, I have learned to incorporate a simple basic rule into my life that is already evident from the Babylonian Talmud written over 1500 years ago:

Transferred, this means one third in real estate, one third in shares, ETFs, funds, commodities, a company of one’s own with the associated human capital or asset-rich goods (for example antiques, vintage cars or similar) and one third in one’s own hands (liquidity in the form of cash, giro money, call money accounts or similar).

Now most people will probably think to themselves:

//I’m already working like an animal!”// This statement is not just a complaint these days, it has become a downright predicate. If you have stress, you are successful and thus fulfill a cultural expectation – well, at least until burnout.

I thought the same way until I understood that the biggest enemy of investment is man himself. We believe that you can become a millionaire with shares, that we need an incredible amount of start-up capital to invest, and that corruption and greed for power flow through the veins of stock market traders.

Those who follow these thoughts should not complain in life that changes become possible only with laborious personal effort.

In the professional power structure, we women already know better: It is not the most hard-working, but the most qualified and the one with the best network who paves a sure path to the top.

Come into action and become a generation broker yourself

My recommendation is accordingly quite simple: Start talking, arguing and discussing about money and investments. Question what seems common and reasonable, always educate yourself and ask those who have already taken the plunge into uncertain territory. And above all: come into action and make your own experiences.

No one wants to receive “pocket money” from his husband, to be kept by him, or to have to constantly lie to himself with justifications (“I also do something in the household, so I am also entitled to financial compensation from my husband”). In relationships you earn something together, that’s true, but having money still means having power, whether you want to accept that for yourself or not. So if you don’t want to be forced into a financial dependency relationship here, you should fight for your own autonomy.

They are only one thing – Strong, intelligent, self-reliant and financially independent – they are alpha women! 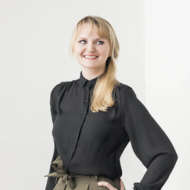 Work happiness as a recipe for success

“Be different, be you” – An interview with Sabina Kocherhans